To go or not to go, was the question foremost on our minds. It had been raining  since the whole of last week week and the trek uphill was sure to be muddy and slippery. But then we were really bored sitting at home with the lockdown still enforced and wanted to step out. We thought we will decide on the feasibility of the trek at the last minute after driving to Lonavla. At least the picturesque drive to Lonavla would be worth our efforts. So off we set sharp at 6 am in the morning from our house, the four of us - I, my husband, our son, and our dog, Nemo, to embark on what was going to be the most lovely trek till date.

Soon we were cruising on the Mumbai-Pune Expressway mindful of the speeding cameras that have been recently installed there. There is a fine of 1000 bucks per every violation and with the sheer number of cameras installed in there, I was fervently hoping that we are able to keep our fine to a bare minimum - kidding :) However, soon I was no longer mindful of any restrictions that we lesser mortals are bound in and instead, started soaking in the verdant landscape that slowly emerged as we left the city behind. The cityscape soon gave way to lush green mountains with cascading streams and waterfalls dotting the vistas. I started drinking in the surroundings -the misty air, so cool and crisp that we could snap our fingers through it, was redolent of freshness. I took in a few deep breaths hoping to capture that fresh aroma of the air, swept clean by the rains.

It was not long before we took the exit for Lonavla and reached the favourite haunt of Mumbaikars and Punekars alike. We had to pass through many tourist spots such as Tiger's Leap, Bhushi dam and other crowded points and luckily did not get stuck in any traffic jams before proceeding straight to Peth Shahpur. We even had to pass a dense forest briefly and it added to our excitement. My dad has a story to tell when he passed this forest two decades ago. He and his group had walked the 21 kms from Lonavala to the base village, and while passing through this very forest they had come to face-to-face with a tiger, who decided to let the humans pass unharmed.

Here is a not-so-clear pic of the forest that we crossed in our car:

This is a very easy trek and a good one, especially for beginners. A small muddy path just around the parking lot is the starting point for the trek. We saw many enthusiastic trekkers at the parking space and made up our minds to go ahead with this popular trek. Our Nemo was the most enthusiastic of the lot. He hopped his way out of the car and soon started sniffing around excitedly.

A few facts about the fort: The fort was an important one and was one of the twelve forts retained by Shivaji Maharaj in the 1665 Treaty of Purandar. It held a lot of strategic significance, especially after the surrender of the nearby forts of Tung, Tikona and Rohida to the Mughals.

Equipment required:  None but wear appropriate trekking shoes for this trek

Distance from Pune: 90 kms from Pune via Mumbai-Pune Expressway. 21Kms from Lonavla. The entire one-way drive to the base village from Pune took around 1.5 hours

Where to stay: Staying overnight is possible in self-pitched tents or in one of the spacious temples up there

Where to eat: Carry your own food & water if possible as limited options are available.  Villagers set up stalls on weekend serving Maggi, bhaji, tea/coffee. One can enquire with the villagers at the base for food options like pithala-bhaakri/meals

Best time to visit: November-February and in monsoons

Parking facility: At Peth Shahpur at a nominal charge of Rs 100 per car for the entire day

The ascent was almost effortless. We did not have to brave the heat which otherwise drains the energy out of us and the rains just added to our vitality. We reached the top of the fort rather quickly to find a vast, almost flat expanse of land ahead all around us. Most of the view was shrouded in fog but whatever was visible was lush green and carpeted with thick grass. The lake in the center was the highlight of the fort. There are several benches kept around the lake. One can relax and enjoy a small picnic by the side of the lake. Just ensure that the place is not littered later :)
Mist of clouds drifted on the fort as we stood on the ramparts trying to get a glimpse of the Aamby valley below. It felt like walking in the clouds - truly ethereal an experience. 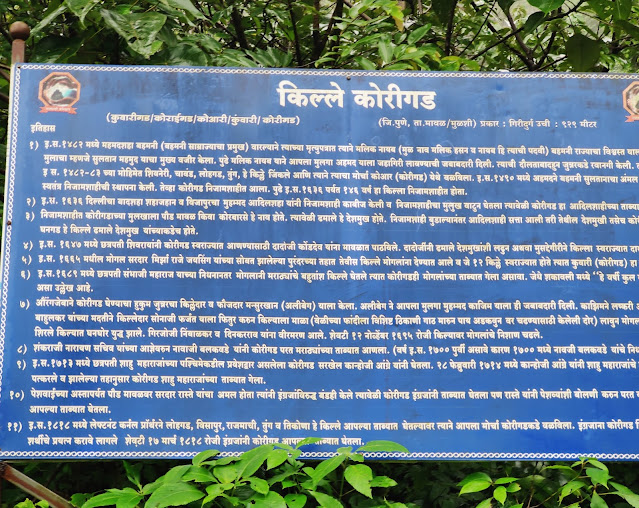 Three or four villagers were vying amongst themselves to take us to their shacks. Soon, we followed one who took us to a make-shift shack where his wife was dishing out snacks as per our order. We enjoyed some steaming hot Maggi followed by cups of sweet tea on the fort taking in the natural beauty of this historical site.
The descent was easy and quick too. We came back via the village temple to our parking lot - a slight detour from where we had ascended. But all roads lead to Rome, so don't worry if you take one path or the other. The destination and distance won't get affected. After cleaning up Nemo and drying ourselves, we were on our way home analyzing the output of our fitbit ;)