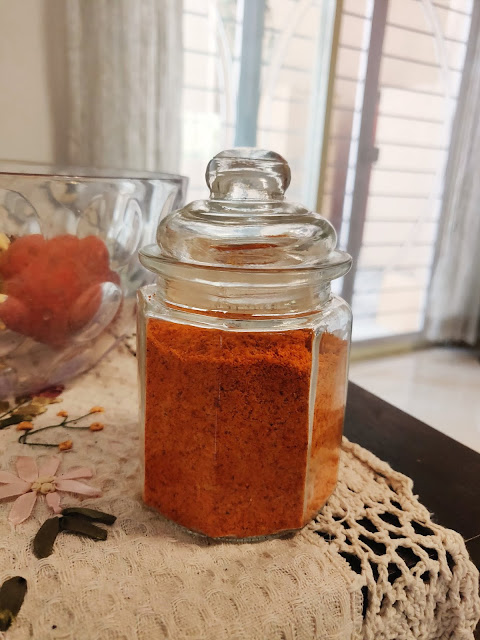 Steaming idlis dipped in sambar served with a spoonful of ghee- tastes heavenly, right? Masala dosas served with an assortment of coconut, tomato and coriander chutneys takes the entire culinary experience to a different level, doesn't it? Well, the options of serving idli-dosas with are endless but have you tried these dishes with the podi yet? Idli-dosas tastes so good with this podi that inspite of making sambars, chutneys etc, this spicy  podi needs to make its appearance on my table every time I whip up either idlis or dosas.

Well, I am talking about the red, slightly coarse, spicy podi (dry chutney) known as milagai podi, gunpowder, simply idli-dosa podi or Karappu as we call it in our house. Karappu stands for Khara = spicy and Uppu = Salt (tikhat-meeth or namak-mirch as we say in Marathi and Hindi respectively). If you are still wondering about the combustible gun powder I mentioned above then let me clarify that it is named so for the fiery punch it packs in a small spoonful of serving.

My house always has a stock of this home-made karappu which usually lasts me for more than a month. It comes in handy for those lazy times when I am not in a mood to cook something elaborate as a sambar or even something simple like a coconut chutney to go along with idli/dosas. At such times, this Karappu is the one which comes to my rescue. Be it the early 7 am breakfast I whip up for my school-going kid or my no-leak tiffin of idli-karappu to be packed and taken on an early morning outing; it is a time-saving delicious spice mix to be had as an accompaniment.

It is to be had with a dash of sesame oil, mixed well into a thick slurry to be eaten as a chutney. Do not try to skimp on this sesame oil served on the podi - firstly, because you will end up ruining the taste  of the podi as to how it is to be eaten and secondly, you will miss on the goodness of this healthy oil.

I fell in love with the Sakthi brand of idli-dosa podi when we were in Bengaluru so much so that I had stopped making karappu at home. However, now that I am in Pune, I have resorted to the home-made version which tastes as good as the store-bought one. Not convinced? Try my recipe out to the 'T' and let me know...

Every South-Indian household has its own recipe of this podi. Some add garlic, some add peanuts; there are umpteen versions of this flavourful spice mix and here is mine, as usual - the no garlic-sattvik version as is common of my household recipes:

Shallow fry these ingredients, except tamarind, in a little bit of oil separately on a low-medium flame. Allow it to cool and grind it into a almost fine powder. If you are using chilli powder, add it towards the end to the ground podi and mix it well.  Some like this podi a bit coarse but the little fellow in my house prefers it fine :)

Hope you make this soon and enjoy it lots!