- January 06, 2020
Name: Rajgad (Formerly Murumbdev)
Height: 4600 feet/1400 metres above sea level
Trek Category: Medium-Difficult trek
Equipment required:  None but wear appropriate trekking shoes for this trek
Base Village(s): Pali leading to Pali darwaza;Gunjavne/Margasni villages leading to chor darwaza;Bhutonde/Bhor leading to Alu darwaza)
Distance from Pune: 60-65 kms from Pune
Time to trek uphill: 2-3 hours approximately ; varies slightly by the route one takes
Where to stay: Staying overnight is possible at the Padmavati devi temple on the fort or in self-pitched tents
Where to eat: Carry your own food & water. Can request food (pithala-bhaakri, pohe etc.) from villagers
Best time to visit: November-February
Guide services on the trek - Not required as the trekking path is quite straightforward and evident.

Rajgad (Raj = Rule/Royal; Gad = Fort) as the name indicates is indeed a royal fort, where Shivaji spent more than 25 years of his life. It served as the capital of Maratha Empire till he moved his capital to Raigad. This fort has seen many historic moments of the Maratha Empire including the birth of Shivaji's son, Rajaram, the second Chatrapati and also the demise of Saibai, the chief queen of Shivaji. Saibai's samadhi (memorial) still stands intact today near the Padmavati temple.

Rajgad is a massive fort with quite a few notable ruins of palaces, potable water tanks and fortified plateaus still adorning its premises. Exploring the fort from one end to another takes a lot of time; hence many visitors prefer to stay overnight to be able to explore the entire fort before descending. There are three main darwazas/entries to the fort from different base villages and also a 'chor' darwaza for escaping the enemies. No wonder, a visit to this erstwhile capital of the Maratha empire is a trekker's delight!

Getting to Rajgad from Pune:

Take NH4 towards Bangalore and take a diversion to the right at Nasrapur phata. From here, the road to Pali and Gunjavne is pretty much a straight road with written directions to the base of the fort. One can also ask the locals for directions.

Buses ply from Pune (Swargate) to Nasrapur phata and even to Margasni Village. From Margasni, one can hitchhike upto Gunjawane or Pali to begin the trek. Plenty of jeeps and mini-vans too are available which ply between Nasrapur and these villages for a small fee.

Parking is available in plenty at Pali village. I haven't been to Gunjavane so cannot comment but parking should be available without any hassle in these villages.

There are few eating joints at these villages; however, it is recommended to carry nutritious food and some 2 litres of water per person for the trek.

Potable water is available on top of the fort. One such particular tank is near the Padmavati temple. One can even carry chlorine tablets to purify this water further, if in doubt. :)

A lot of villagers sell buttermilk, nimbu paani and water bottles along the way and on top of the fort as well for some 10-20 bucks. Some villagers also arrange for pithala bhaakri, pohe, bhajiyas for the trekkers as per their feasibility. They get the food for you on top of the fort.

A humble request to not bargain with these villagers,who try to make ends meet, for a paltry amount.

Toilet facilities are obviously not available while trekking.

We decided to take the Pali route leading to the main entrance of the fort, the Pali darwazas, (you read it right, there are 2 Pali darwazas within a few metres of each other) as we wanted to complete our trek in a single day.

1) The Pali route is the easiest one and is basically just trekking for about 2 hours with no steep patches.  One can find plenty of trees along the way as well to rest. After  about 15-20 minutes into the trek, I got acclimatised to my climbing rhythm and breath. Once done that, the rest of the trekking was a breeze. We made it to the Pali darwaza without stopping in 1.5 hours. Starting early at 8 am helped us with the heat factor too.


2) The trek through Gunjavane village leads one to the Chor darwaza, which is supposed to be a tougher but more scenic route to the fort. There is a small patch of steep ascend to the Chor darwaza which is provided with railings. It takes an hour more through this route than the Pali route. The Gunjawane darwaza is not much in use nowadays.

3) The third and the not-so-popular route is through Bhutonde village. This route takes one through the Alu Darwaza facing the Torna fort and takes around 3 hours or more.

4) One can also reach Rajgad from the Torna fort. One has to cross the ridge connecting the two forts starting from the Konkan darwaza of Torna and takes nearly 7-8 hours.

Rajgad is truly a royal fort with its many darwazas, chilkhat walls (double fortifications) and its majestic balle killa. It is a sought-after destination especially after the monsoons. Verdant, green carpets adorn the surroundings after the magic spell of the monsoons making the trek even more alluring. One has to exercise more caution though as the trek gets more slippery during the rains.

There are many points of interest atop this fort:

1) We entered the fort through the Pali Darwaza and explored the Padmavati Machi. The Padmavati temple, Rameshwar temple, water tank and Saibai's Samadhi are the highlights of this machi. The Chor darwaza too can be seen from near the tank.

From there, we proceeded towards Suvela Machi first and planned to cover the Bale Killa later. It took us an hour and a half to reach this machi crossing the Chilkhati Buruz and the Ambari. Just after the Ambari, we reached the Nedhe and zigzagged our way up there. On the way there, we saw a beautiful Ganesha embedded in the wall of the fort (Tata varcha Ganapati). 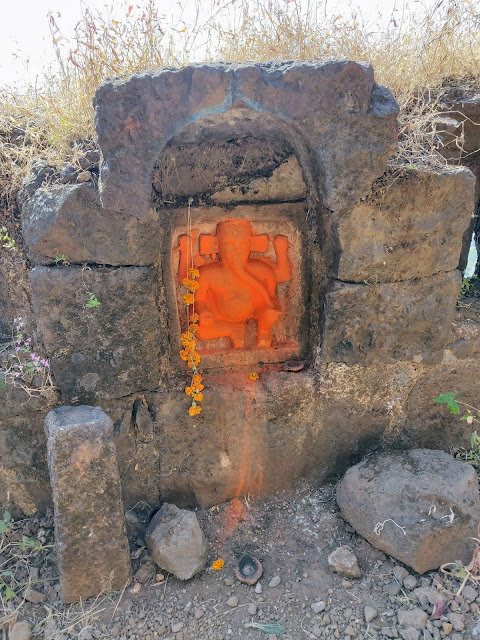 9) After conquering the Suvela Machi ;), we turned towards the Bale Killa. The climb to its Maha Darwaza is quite steep and definitely requires the railings which are fitted there. I had to scramble (read climb) that steep patch hurting my knee slightly in the process :) Once we reached the Maha Darwaza, the vistas in front were mind blowing. This is the same darwaza where the Mughal commander, Afzal Khan's head was buried in.

Further ascent led us to the Chandratal (crescent shaped lake) and another flight of steep stairs took us to the ruins of Sadar (court room) and Rajwada (palace). I literally felt being transported in another world. The stone foundations of these buildings are still intact and I was left wondering how majestic it would have looked in its glorious days. The Saffron flag symbolizing the Hindavi Swaraj, stood near the palace ruins fluttering tall speaking volumes of the bygone era.

Exploring the Bale Killa took us another hour and a half and visiting the Sanjeevani Machi takes about the same time.

All in all, exploring the fort in a day is a mighty task and I would have preferred to camp on top of the fort. However, this particular fort is definitely worth all the efforts. Don't forget to take in the views of the neighbouring Torna and the distant Sinhagad and Purandar on a clear day!

Staying overnight on the fort:

Padmavati temple, which can accomodate upto 50 people; the Rameshwaram temple which can again accomodate some 5-6 people are the best sites for overnight stay. The authorities have also constructed a tourist hall all secure with doors and windows where one can stay for the night. It is usually locked but one can approach the caretaker through the villagers and get it opened.

One can also pitch a tent in the vast open grounds of the fort. Availability of drinking water on top of the fort makes camping definitely easier.